In most “pick a card” tricks, you won’t know the identity of the chosen card until the very end of the trick.

It makes for a pretty dramatic reveal that way!

But there are also TONS of amazing effects you can do when you DO know the identity of the chosen card, secretly, the entire time.

This usually requires the use of a card force; literally forcing a spectator to choose a certain card while making it look like they have a totally free choice.

The best card forces in card magic will depend on the situation, but a few of my favorites are:

Below I’ll explain each in detail and how/when they’re best used, plus a few cool things you can do with card forces!

Why card forces are useful & what to do with them

In most cases, you’ll want to force a card so that you can create an impossible reveal without doing any sleight of hand with the deck.

If you force the participant to choose the 5 of Spades, for example, you could allow them to place it back in the deck and even shuffle the cards themselves.

It won’t matter where that card ends up, because you know what it is and can still complete the effect — which makes things look pretty impossible!

Probably the simplest effect you can do with a card force is to simply name the spectator’s card without ever seeing it.

In the hands of a skilled performer, this can be quite powerful. If you just blurt it out, well, that’s lame. But if you slowly intuit that it’s a low card… then that it’s a dark card, a black card… Yes, yes it’s a spade!

That can be a pretty entertaining mentalism-type effect.

A few other cool things you can do with a forced card:

Those are just some ideas to get you started (follow those links for tutorials).

Once you learn some good card forces, you can really be creative and challenge yourself to come up with amazing effects and reveals.

But now let’s learn a few of the moves and sleights!

This is one of my favorite forces. It’s quick, practical, easy to do, and quite convincing.

All you’ll need to do here is prepare your force card at the top of the deck.

When you’re ready to perform the effect, simply cut the force card into the middle of the pack and hold a pinky break.

Riffle your thumb along the corner and invite the participant to call Stop whenever they’d like.

No matter when or where they stop you, simply split the deck at your pinky break and hand them the next card in your dominant hand, which will be the force card.

Difficulty: Easy. It will take just a small amount of practice to get the angles and timing right, but there’s nothing particularly hard about this one.

Convincing-ness: Good. It’s best done casually, as if it doesn’t really matter what card you end up using. It’s probably not the best force if you REALLY make a big deal out of them having a free selection.

Effect: The participant is invited to cut the deck in half on a table wherever they’d like. After pausing to explain the coming effect, the spectator is allowed to look at the card they cut to — which is, of course, the force card.

This one can be extremely useful and deceptive in the right situation, but you have to know how to use it.

The key to the cross cut force is time delay.

Essentially, you have the spectator remove about half the cards from the top of the pack and place them on the table.

Then you explain that you’ll “mark” the spot where they cut by placing the remaining cards perpendicular on top of the packet they removed.

This is where the time delay comes in. Here’s your chance to explain the effect, give background, make interesting conversation, and just generally delay the reveal of the chosen card.

When you’re ready, remove the cards that are resting perpendicular on top of the others and allow the spectator to turn over the top card of the tabled pack, the “card they cut to.”

Of course, this was the top card of the deck all along, and your force card. But with the proper handling and misdirection, no one notices.

Difficulty: Extremely easy. No sleight of hand required, but you do need to be able to engage with your audience for a few moments to achieve the needed misdirection delay.

Convincing-ness: Pretty good when done well, but again, it’s best not to draw too much attention to the fact that they could have had any card they wanted. This one is best used for spooky effects and mentalism effects when you have a lot of presentation and patter to engage them with.

Effect: The magician spreads the cards out in front of the spectator and invites them to choose any one they’d like. The card they freely selected is, of course, the force card.

This is probably the “best force” out there, but it’s also the hardest and least reliable.

Why is it the best card force? Because it looks exactly like they really just reached in and picked any card they wanted. And, in fact, they did.

The classic force is all about timing and presentation.

You’ll hold a break at your force card in the middle of the deck and spread the cards out for your spectator.

You’ll just need to develop a feel for how quickly to spread the cards out, how far forward to thrust the force card, and what to say to get your participants to quickly and casually take the most easily available card.

The classic force is not something I’ve ever personally mastered. But the best way to learn it is to just try forcing a specific card every time you do a normal pick-a-card type trick.

The only way to learn it is to try it in the real world to learn the timing.

Here’s an excellent tutorial that’ll help you get going:

Difficulty: Hard. This one requires a lot of practice and experience to get right, and it can still fail quite often.

Convincing-ness: Excellent. They really do have a free choice, and there’s no way for them to know you forced them to choose a certain card. If you can master this one, it will become your favorite.

Using this one, you CAN really play things up. “You could have taken ANY card you wanted!” Because it’s actually true.

4. Under the spread force

Effect: The magician spreads the cards out in front of the spectator and invites them to TOUCH any one they’d like. Instead of removing it from the deck, the magician simply holds up the deck and allows them to memorize the card, then loses it in the pack. Their selection is, of course, the force card.

This is a fantastic alternative to the classic force that’s way easier to do, nearly as convincing, and never fails.

The only downside is that the spectator isn’t able to remove the card from the deck. So it’s great for tricks where you don’t really need the cards after the force, but it’s limited in its application for that reason.

What happens here is your force card slides freely under the bottom of your spread as the spectator touches a card.

Once they touch one, you break the pack at their selection and square the cards up, which slides your force card in front of the one they actually chose.

Then you hold it up for them to see and then put the cards aside.

Jay Sankey teaches an excellent handling of this one below (plus some other great forces) — the under the spread force is about halfway through the video.

Difficulty: Medium. It’s not a difficult one to learn, but you’ll need to practice to get it looking smooth and convincing.

Convincing-ness: Extremely good. This one looks almost as fair as the classic force, and in certain situations, it can even be better.

Effect: The magician shuffles through the cards, inviting a participant to call Stop whenever they’d like. Invariably, the card they stop at is the force card.

I like this one because it’s easy, deceptive, and although it looks a little less fair than the spectator just touching any card they want, it has an element of randomness to it because the cards are really (truly) being shuffled.

The force card starts on the bottom during the Hindu shuffle force.

Whenever the spectator calls stop, simply hold up the bottom (force) card for them to see, then drop those cards on top of the pile and put the cards aside.

Once you know how it works, you’ll think it wouldn’t fool anyone, but it really does!

You can learn this one in more detail in the Jay Sankey video above.

Difficulty: Easy. You’ll want to learn the Hindu shuffle, anyway, as a card control. Once you know it, the force is easy as pie.

Convincing-ness: Good. It’s pretty unlikely you’ll get called out for this one, and I love the chaos and randomness of the cards being shuffled up during the selection. It’s another good “quick and casual” one and not a force to be put under a magnifying glass.

Those are my favorite forces, but there are plenty of other great ones you can use or try.

I’m not sure there’s one, single “best force,” as much as there are “best ones for certain situations.”

The classic force is super powerful, but quite difficult and even with a lot of practice, it can leave you high and dry when it fails.

It’s best to learn a few different forces and try to match your effects with a card force that suits each one individually.

What are your favorite forces? And how do you like to reveal a forced card? 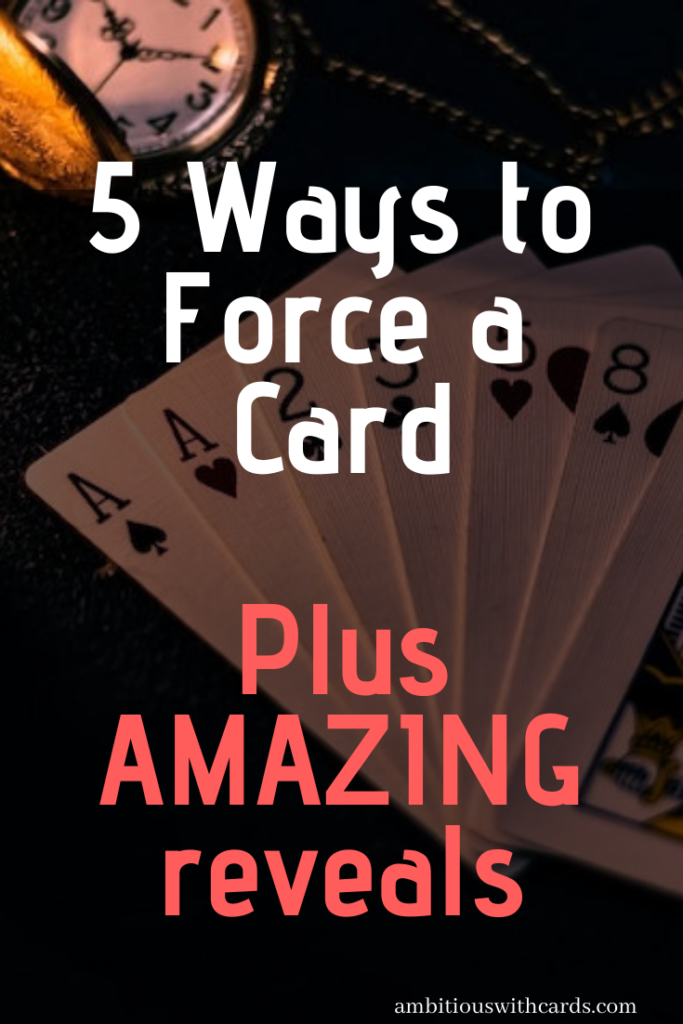