Looking to get started with card magic?

There’s a whole big world out there, full of thousands of sleights, dozens of gimmicks, and literally millions of individual tricks.

It can be a little overwhelming at first.

But you only really need to know a couple of card trick basics to get started performing.

If you could only learn a couple of moves and principles, I think the most important basic sleights for card tricks are the:

I’ll break down the importance of each below and give you some other tips that might help early on in your card magic journey.

First thing’s first, you need to know how to handle cards to do great card magic.

By no means do you have to immediately (or ever) be a great cardist who knows a ton of beautiful flourishes.

But you need to get comfortable holding and handling cards so that it becomes second nature.

(If you’ve ever watched a “normal” person handle cards, you’ll notice they are often quite clumsy with them and have a tendency to drop them all over the place.)

It all really starts with learning the basic mechanic’s grip.

Simply put, the mechanic’s grip is your starting point for most sleight of hand techniques, and it’s the most comfortable and secure way to hold a deck of cards.

Put the cards face down in your non-dominant hand with your index, middle, and ring fingers resting on the side. Your index finger holds the cards in place diagonally along the front, and your thumb rests comfortably on top.

From here, it’s easy to spread the cards out (to show them to a spectator or have them pick a card), deal the cards, or perform most sleights.

A staggering amount of card tricks all begin the same way:

“Pick a card, any card! OK, remember it, now return it to the deck.”

99 times out of 100, when a participant returns their card to the middle of the deck, the magician will hold a pinky break just above it so they can easily control it to the top of the deck or wherever else they’d like.

If you don’t learn this extremely basic card control prerequisite, you’ll be pretty limited in the tricks you can learn and perform.

But don’t worry, this one is ridiculously easy.

You’ll want to practice in a mirror a few times, but once you have it down you’ll likely never, ever get busted doing this.

It’s that simple and invisible, but it is a mandatory card trick basic.

OK so now that you know how to hold a deck of cards, and how to get and hold a secret break above a selected card, you need to learn something a little more advanced.

In a large majority of card tricks, you’ll need to get a selected card that’s seemingly lost in the middle of the deck to the top, bottom, or other key position to set up for the big reveal.

One of the best and simplest ways to do this is to use a double undercut.

Basically, it looks to the spectator that you’ve simply cut the cards twice at random, when you’ve actually moved their card exactly where you want it.

It’s extremely easy to learn and looks pretty dang convincing once you learn to do it smoothly.

It’s a basic, beginner technique, but you’ll probably come back to it again and again even as you learn more advanced card moves.

Alternatively, you could learn something slightly more advanced like a Hindu shuffle control or a pass, but we’ll get to those later.

This is the first one on the list that will probably require a lot of practice.

However, it’s worth it, because this is by far the most powerful and useful sleight of hand move a card magician can know.

A double lift is when you turn over two cards as one.

The applications are absolutely endless and way more than we can cover here, but there are entire card tricks and routines built around almost nothing but the double lift.

Learn this move well and you can absolutely floor people.

Unlike the other moves on this list, you have a lot of different stylistic choices for which double lift to learn.

There’s the strike double, the push-off double, and so many more.

For now, just practice getting a small pinky break below the top two cards and turning them over casually as one.

I’ll link out to a more detailed tutorial in the near future, but you’ll find tons of them for free on YouTube.

So far we’ve mostly talked about sleights in the context of “pick a card” tricks where the selected card must be located and controlled.

But there are other great effects out there where you know the selected card the entire time and can reveal it with little to no sleight of hand.

Often, these effects use something called a card force — where you literally force the participant to choose a certain card, although it looks to them like they have a free choice.

There are hundreds of card forces to choose from, but to get started, you really only need to learn one or two easy ones.

My favorite beginner card force is probably the riffle force:

Timing and confidence will come with practice, but I’ve never had an issue using this force.

When you’re ready, there are more advanced methods you can try.

6. A false shuffle or cut

When it comes to card control, you’ll rarely need a whole lot more than a good double undercut.

However, it can really help to have a couple of good false shuffles in your arsenal for when you REALLY want to convince people their card is hopelessly lost.

(Alternatively, a lot of tricks require a certain setup — the deck stacked in a certain order, or a packet of specific cards at the top or bottom of the deck that you’ll need to retain.)

One of my favorites is the false overhand shuffle.

This one can be tweaked and customized to do whatever you need it to do (retain the top card, retain the top half of the deck, move a card from the bottom to the top, etc.), all while looking completely fair.

I’ll link out to my full breakdown and tutorial soon, but basically here’s how it works:

This one is easy to learn and looks great, as it can be done pretty casually and even sloppy.

The moves and principles above should be more than enough to get you started.

With just these, you can learn and perform probably 80% or more of card tricks out there.

And what’s even cooler is, with a strong foundation, you can start to invent your own routines or even reverse-engineer effects you see online or on TV.

Eventually, you’ll want to add to your arsenal, learning more advanced sleight of hand technique. But even if you never learned anything beyond these 6 things, you could create a pretty impressive bag of tricks that could last you your whole life!

Did I miss anything? What do you think are the most fundamental card moves new magicians can learn? 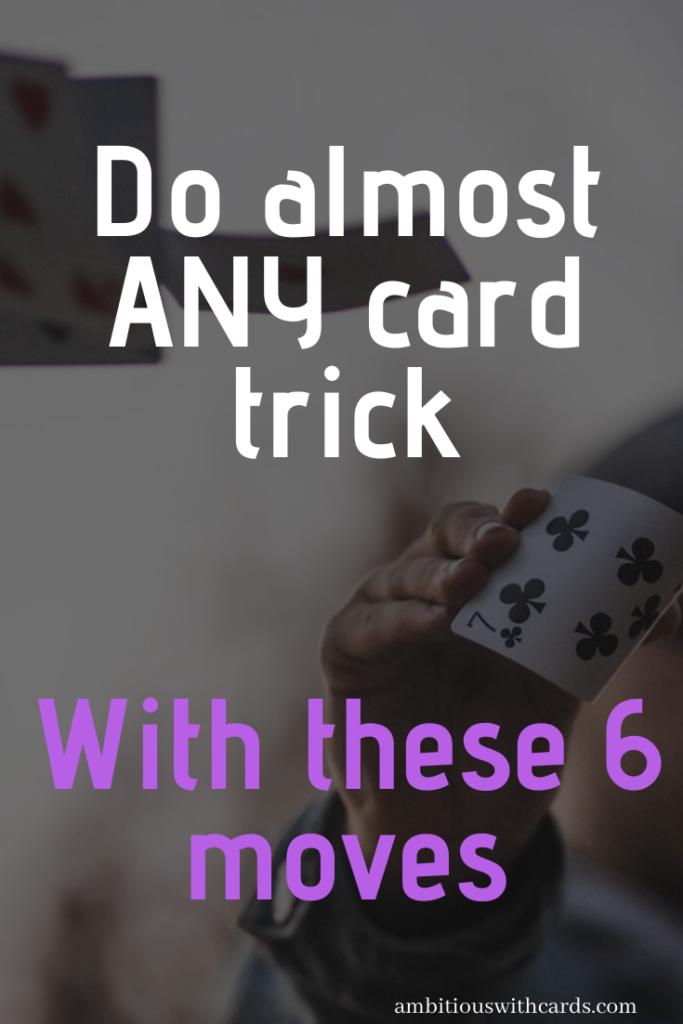