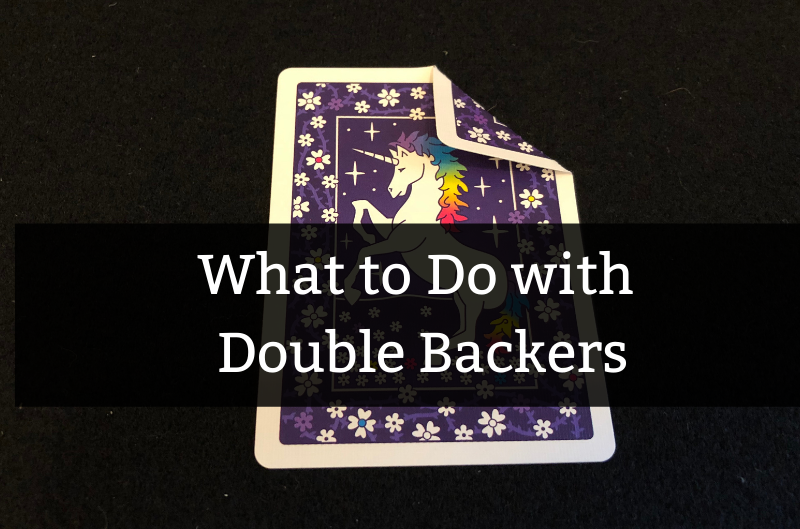 If you’ve ever purchased a pack of premium playing cards (in other words, not Bicycle or Bee), you might have noticed something.

Your deck may have included a double backer card.

Simply put, these are special cards that have no face — only the deck’s back design on each side — while remaining the same size and thickness as a single playing card.

What should you do with these special gimmick cards? What are the best tricks using double backers?

Below, I’ll describe a few principles you can use to design your own double backer effects, and refer you to a couple of excellent routines you can learn or buy that use double backers.

(P.S. You can buy an entire deck of double backer Bicycle cards from Amazon to practice these effects and have plenty of souvenirs to give out.)

One of the best things you can do with your double backer cards is to design your own routines and effects.

The possibilities are limitless!

To get started, it helps to understand a few of the ways you can use double-backed cards — though the list below barely scratches the surface of what they’re capable of.

If you place a double backer in the middle of the deck, you’ll notice something interesting.

Spread through the cards from the back and nothing seems out of place. The deck can be displayed completely normal.

Spread through the faces and you’ll see one card seemingly reversed in the middle (your gimmicked card).

This is an interesting principle you can play with.

For example, you could create a paradox type of effect where you show one card reversed in the middle of the deck from the beginning of the effect, before the spectator even chooses a card.

Have them choose and sign one, then show that the reversed card in the middle was their signed selection the entire time!

(There are tons of ways you could handle this effect. That’s just an idea to get your creative juices flowing!)

If you have a deck with a double backer in front of you, try this:

Place the double backer on top, then perform a double lift.

The card that was second from the top is now floating freely face up on top of the deck and can be cleanly shown as the top card.

(In a normal double lift, you would see the other card’s face below it. But here you only see a back.)

This is a powerful principle that can be used in a number of ways.

In fact, the trick that fooled the legendary Houdini used a double backer. Dai Vernon fairly placed a card second from the top (similar to his Tilt depth illusion) and then instantly showed that same card to be on top of the deck.

The illusion created by the double backer baffled Houdini.

Some people like to incorporate this idea into their Ambitious Card Routine.

It can even be done in reverse. Place the selected card face-up on top of the double backer and perform a double turnover.

It looks like you’ve simply turned the selected card face down, but now the double backer is on top and can be placed in the middle of the deck or some other location for a magnificent transposition effect.

It’s popular among magicians to use double backer cards as magical souvenirs for their participants and audience members.

You’ll see examples of this below, but there are lots of easy effects you can create where two cards merge into one — leaving a really cool keepsake for your spectators.

Now let’s get into some of the actual effects you can buy and learn.

You can always design your own tricks with double backers, but the pros have already done a lot of the heavy lifting for you if you just want to get right into performing!

Here are 3 of my favorites:

Autograph is a special handling of the classic Anniversary Waltz effect (a tremendous routine in its own right that will appear in my guide to using double facer cards soon!)

Magically, the two signatures change places while the cards are in full sight. Then, for the finale, the two cards fuse into one with both signatures on the same card.

You can grab the DVD instructions for Autograph here.

An “All Backs” routine on steroids.

Break open a brand new deck of cards and show that it’s been misprinted… the back design is on both sides with no faces to be found!

Regardless, the spectator chooses a card (all-backs as it may be) and then watches as their selected card is used to reprint the deck in front of their eyes.

You have to see this one in action to get the full effect, and you can learn it from the Daniel Garcia Project DVD.

Jay Sankey is a master of simplicity and elegance, and this quick, visual effect is no exception.

A participant chooses a card from a deck that’s shown to be entirely red.

It’s placed fairly back in the deck and in an instant, the entire deck turns blue except for the red, chosen “Outsider” card.

It’s an easy to handle, brilliant twist on the color changing deck.

If you like Card Warp, you’ll love this mind-bending piece of magic from the master, Daryl.

Two Jokers with different back designs are handed out for inspection and are signed by audience members.

The cards are then cut with scissors, folded, and twisted together — sending them “through the 4th dimension” in Daryl’s words. When they’re finally untangled, one card has both back designs and the other has both Joker faces — with signatures completely intact!

Watch the man himself, Daryl, perform this fooler in the clip above.

Hyper-Bent-Elation is hard to find these days, but you might be able to grab a copy from MagicWorld.

You can make your own or buy them on Amazon for standard decks, but you should definitely keep the ones that come with special decks from Theory11, Ellusionist, and more.

You can do some truly impossible-seeming effects with these gimmicks, and they’re incredibly easy to hide in plain sight. In some cases, using a double backer combined with traditional sleight of hand can create stunning results.

What’s your favorite way to use double backers?