I may earn a commission for purchases made through links on this page, but I always stand by my opinion and recommendations.

The Haunted Deck is one of spooooookiest, and visually stunning, card tricks around.

It doesn’t get any more visual and easy to understand when it comes to card tricks. This is a great one for kids, parties, and close-up shows of every kind.

You can buy a gimmicked deck of cards to accomplish this trick, or make your own Haunted Deck (there are also non-gimmicked versions available).

To make your own DIY Haunted Deck, you’ll need a complete deck of playing cards, some tough, thin thread, some super glue, a hole punch, and a safety pin.

Warning: After doing this myself, making your own Haunted Deck is kind of a pain in the butt, and it’s not particularly cost-effective.

Unlike making a Brainwave or Invisible Deck, you’ll spend way more on materials here (not to mention construction time) than you would by just buying the gimmicked deck.

You can grab one on Amazon right here.

If you’re sure you want to go the DIY route, read on for full instructions, photos, and the tutorial!

In this chilling card trick, up to 3 spectators are invited to choose a card from a deck.

One by one, the cards are memorized and placed fairly back into the pack.

No sleight of hand or funny moves here.

On the magician’s command, the deck begins to move by itself. The cards slide one way, then the other, back and forth several times, until just THREE cards are left poking out of the deck.

Of course, these are the selected cards.

How does the Haunted Deck work?

There are a few ways to accomplish this basic effect, but the most common way (and the one we’ll be discussing in-depth) is through the use of a trick deck of cards that uses thread to make the cards move.

Essentially, the Haunted Deck has a line of thread running through the middle of the majority of the cards. The free end is usually attached to the magician’s pants with a safety pin or other device.

When un-gimmicked cards are inserted into the threaded-deck, they create crooks in the line and tension.

When the magician pulls the deck away from his body (or pulls his leg away from the deck), the thread is forced to straighten out, pushing the selected cards out of the deck in an EXTREMELY visual and delightful manner.

Making vs buying the Haunted Deck

There are a couple of reasons I think most people should stay away from trying to make their own haunted deck.

First is the cost of materials.

You might have some of this stuff laying around, but even still you’re probably looking at a minimum investment of $10-11.

Once you have everything, you can make multiple Haunted Decks, true, but this isn’t as much of a slam-dunk money saver as making your own Invisible Deck.

Second is the hole punch.

Your run-of-the-mill $2 hole puncher from Walmart doesn’t work perfectly for this. It can’t quite reach the middle of a playing card to punch a hole in the direct center.

In the tutorial below, you’ll see mine is slightly off-center, which results in a slightly less dramatic reveal of any cards inserted to the deck on the short-hole side.

To get a hole in the direct center of the cards, you’ll probably need a really good hole punch. If you don’t have one already, it’s likely to set you back $15-20 or more.

At that point, making your own deck becomes a complete waste of time and money when you can buy one already done for about the same price!

Making your own is a good option for working magicians who plan to use the deck frequently and will need to make more down the road.

If you still want to try your hand at the DIY route, let’s get into the instructions!

To make your own Haunted Deck, you’ll need:

One complete (and ideally brand new) deck of cards. I get these in a 12-pack on Amazon for a great price and use them to make all sorts of gimmicks.

A hole punch. You can get a cheap one online or at any store near you, but it won’t be a perfect fit. Higher-end ones will cost you more than buying a Haunted Deck.

Thread. The best thing to use is a thin-gauge of nylon thread. Black is good, but so is anything in a grey color. You’ll want the thread to blend in with your performance environment or clothes, so it’s really up to you to experiment here.

If you don’t have any of this at your house currently, you’re looking at $10 or more in total cost.

The good news is that, once you do this once, you can make additional Haunted Decks later on.

Step One: Open the deck and remove the Jokers and advertisement cards

We’ll be using the Jokers to make part of the gimmick.

You might be able to use one of the ad cards, as well, if it has the same back design on it as the rest of the cards. If the card is just promotional material on both sides, toss it or keep it in your “junk drawer.”

Step Two: Punch three holes in one of the Jokers

Use your hole punch to create three holes that are, relatively, evenly spaced around the center point of the card.

The holes should form a triangle of sorts.

Again, with a cheap hole puncher, this will be far from perfect.

Step Three: Punch one hole in the center of the other joker

You won’t be able to get a hole directly in the center using most hole punchers, but get as close as you can.

(Don’t try to drill a hole or poke one with a nail. It might be OK for this step, but it won’t work later. It causes too many edges to jut out on the cards.)

You’re going to use the Jokers, plus one extra card, to create a thick “anchor” that will hold the end of the thread in the middle of the deck.

Grab the loose end of your thread and thread it through the Joker with a single hole from front to back.

Then, thread the loose end through the 3-hole Joker, weaving in and out of each hole and placing a small portion of the loose thread resting on the back of the card.

Apply some super glue to the thread, and to the rest of the back of the 3-hole Joker (the colored Joker, in my example).

Stick the ad card or indifferent card down onto the super glued area, trapping the thread inside.

Apply super glue to the face of the 3-hole Joker and press the 1-hole joker (with thread running through it) to it.

You should have three cards glued together with the spool-end of the thread coming out of the bottom or faces of the little packet in this order:

Step Four: Spool off a long portion of thread and cut the thread.

You’ll want about three feet or so of thread coming out of your little 3-card anchor.

You can always trim this later, so be generous.

If you cut it too short now you’ll be in quite a pickle later.

Shuffle the rest of the deck of cards, you want to get them out of new deck order and into a random order.

You also want to wear off just a tiny bit of that new deck slickness so the cards don’t slide all over the place while you perform.

Then, separate the cards into two piles.

In one pile, you want about 30-35 cards (you’ll be altering these to create the gimmick).

The other slightly less than half of the cards will remain ungimmicked.

Step Six: Punch a hole in the center of the larger pile of cards

You want a hole going straight through the 30 or so cards you set aside so the thread can run down the middle of them.

Ideally, you want this hole in the direct center of the cards.

If you didn’t feel like spending $30 on a high-end hole punch, you may have to settle for just off-center.

You can also take this stack of cards to a print shop like the UPS Store and ask them to do it, though that’s another errand and cost.

Thread the free end of thread through the hole you just created in the pile of cards.

These cards will be toward the BOTTOM of your deck. The thread anchor gimmick will be, roughly, in the middle.

And on the top will be the remaining un-modified playing cards.

Attach the free end of your thread to a safety pin and you’re ready to go!

How to use & perform with your Haunted Deck

Here’s the basic tutorial on how to use this gimmicked deck.

This will take a good bit of practice.

The effect and gimmick are self-working, but your first couple of times you will fumble badly with the cards and get the timing of your body movement all wrong.

Practice in a mirror until you’ve got it down.

(You can also use a single selected card to perform the Rising Card with this deck. Just hold the cards vertically (but cover the holes and thread with your hand!) before you apply tension to the thread.)

You’ll also notice that the thread attached to the cards is CLEAR AS DAY to you, from your perspective, but if you’re wearing clothes (or performing at a table) that blends in with the thread, it will be VERY difficult for your audience to see the thread.

Again, practice your angles, camouflage, and misdirection in the mirror before you perform.

Note: You may want to carry a similar design non-gimmicked deck with you in case your audience insists on inspecting the cards.

This effect looks simply impossible when you see it for the first time.

Once you know how it works, it’s still pretty cool! But don’t forget to give this effect the build-up and performance it deserves.

Making your own Haunted Deck is a little tricky and a good deal of work, so if you want to buy one, you’ll get a great deal on Amazon.

What’s your best performance tip for the Haunted Deck or Rising Card?

Tell me in the comments! 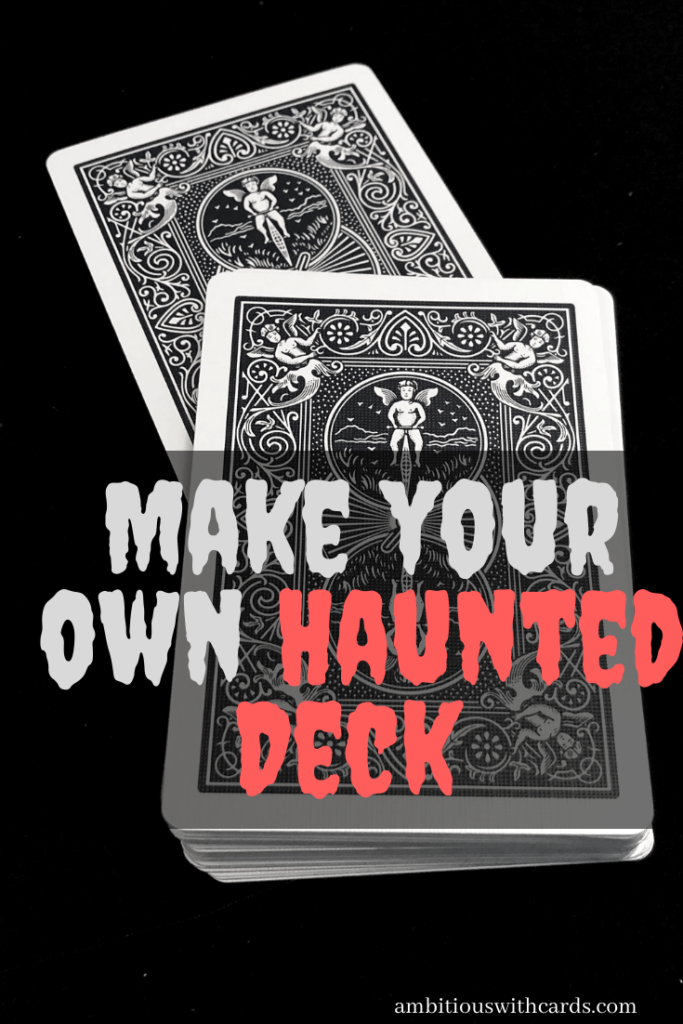