If you’re a hobbyist, like me, you’ll want a card trick repertoire that’s mostly full of effects you can perform FASDIU.

That’s From A Shuffled Deck In Use.

In other words, completely impromptu, no setup, no gimmicks, and no preparation needed.

The best impromptu card tricks that I know are:

Below, I’ll describe each, give my thoughts and tips on the effect, and tell you where to learn it (most of these have video tutorials available online for free).

I also interviewed a pro magician, Joe Skilton, about his favorite impromptu routine over on my YouTube channel:

Effect: A spectator picks a card, then returns it to the deck. The magician thoroughly shuffles the cards, including mixing face-up cards sloppily into face-down cards, losing the selected card in a hopelessly jumbled mess of a deck.

Using an indifferent card as a “magic wand,” the spectator waves it over the deck, causing the cards to travel “back in time.” Before they know it, the entire deck has been unshuffled, with each card facing the right way, and the indifferent card they’re holding has transformed into THEIR card, as if the trick never even happened.

Difficulty: Easy-Medium. You’ll need to know or learn just one or two simple moves to pull this off. The false shuffle involved is a breeze.

My thoughts: I learned this trick off of one of Jay Sankey’s DVDs back in the day, but lucky for you, he’s giving it away for free on his YouTube channel these days.

This is, hands down, one of my absolute top, favorite, go-to impromptu card tricks.

It’s relatively easy to do and gets AMAZING reactions.

(It’s also fun to do, with a cool plot and, if you present it this way, a great moment where it looks like you screwed the whole trick up!)

It’s essentially an in-the-hands Triumph — (Triumph being a classic card effect where a mixture of face-up and face-down cards magically re-orients itself) — with a kicker ending and a unique handling.

Where to learn it: Watch Jay Sankey himself perform and explain this one in the YouTube video below.

2. 1/2 Deck, Impromptu Out of This World (Curry, Lorayne, Colombini, Ammar)

After going through about half the deck, the magician stops and reveals the results — the participant has gotten the color of every single card right!

Well, except for two.

And it just so happens that those two cards match the written prediction that’s been in plain sight the entire time.

Difficulty: Easy-Medium. There’s a decent amount to keep track of during this trick, and a little bit of handling, but there’s really no sleight of hand to speak of involved.

My thoughts: Out of This World is another classic card routine, where a spectator magically separates red and black cards perfectly without looking at them.

This handling from Michael Ammar and others does a couple of things I like:

If you have a patient audience that can pay attention for a couple of minutes, this one hits really hard and is a lot of fun for the participant.

Where to learn it: I learned this from the Michael Ammar series, “Easy to Master Card Miracles.”

You can watch the performance below. From there, just go to Ammar’s website — you can purchase the explanation for just $3.75, or pay about $9/month to access everything on his site.

Effect: The magician takes a freely selected and signed card and places it into the middle of the deck. With a simple snap of the fingers, it jumps to the top of the deck.

This effect is repeated again and again under more and more impossible conditions, leading up to one of many amazing finales.

Difficulty: Medium-Hard. This can be as simple as using a few double lifts. It can also be as hard as you want to make it. But in any case, you’ll need to master a couple of card moves to do this routine.

My thoughts: Another classic. If you’re a card magician, you have to have some version of the Ambitious Card in your routine.

What’s cool about this one is that it has a fun and simple to follow plot, for starters.

Next, it usually uses a signed card to eliminate the possibility of duplicates. People LOVE signing cards, and it gives them a great little keepsake after.

Third, the Ambitious Card routine is completely customizable. You can make it as short or as long as you want, adding in or subtracting phases, and swapping in new endings as often as you’d like.

Make it your own!

Where to learn it: Here’s a really great, free tutorial from Assad at 52Kards that should get you started with Ambitious Card.

Effect: A participant chooses a card, freely, then returns it to the deck. After some shuffling or simple cuts, the magician declares he or she will find it “by feel.” He quickly narrows it down to only 5 cards, giving the rest to the spectator.

Without identifying their card, the participant confirms it is indeed one of the 5 the magician is holding. Then, by magic, the card suddenly disappears from the packed of 5 and appears face-up in the deck the spectator has been holding the entire time.

Difficulty: Easy-Medium. You’ll need to know a basic card control or two and one key move (The Biddle steal) that makes it all possible, but this one isn’t exceptionally difficult.

My thoughts: This trick is an absolute KILLER. The reactions you’ll get are fantastic, as the end result really does seem impossible.

Like all the effects on this list, the Biddle trick is totally impromptu and uses a borrowed or freely shuffled deck, and it’s great because there’s a lot of spectator involvement along the way.

Where to learn it: This one is so old, it’s everywhere. It’s included on some great magic sites and DVDs, but the simplest solution is just to watch a solid YouTube tutorial like this one from Alex Pandrea.

Effect: A spectator freely and thoroughly shuffles the deck. The magician, without even touching the cards, removes one single card as a prediction and rests it on the table.

The participant then takes a pile of completely and truly random cards from the deck and deals it into two piles. The tops cards of the two piles are revealed to match the value and suit, respectively, of the prediction that’s been in plain sight the entire time.

My thoughts: This one is all about the presentation and subtlety. And what’s fun about it is that you really can, truly, not touch the cards at all during the trick – even after they’re completely shuffled.

(Though if you have a spectator who’s clumsy with the cards, you may want to step in at some point to help.)

It’s a nice change of pace and requires zero sleight of hand, so it’s a good one if people are starting to really burn your hands.

Play around with your presentation and some of the handling and you’ll find it can really pack a wallop.

Where to learn it: Learn Michael Ammar’s handling of this effect from his website. He has a couple of subtle convincers that turn what could be a lame trick into something truly impossible.

6. Spectator finds their own card! (Sankey)

(Sorry, not sure if this effect has a better name!)

Effect: From a completely fairly shuffled deck, a participant selects a card and the magician loses it in the pack.

Then, the participant is invited to touch as many cards (sight unseen) from the fanned deck as he would like, in an attempt to choose his own card again.

These cards are counted, and the participant freely chooses any number (between 1 and the number of cards). The selected card is revealed to be THE card at that position in the packet.

Difficulty: Easy. You’ll only need to know one easy move and a sort of simple mental force to do this one. It should take hardly any practice at all.

My thoughts: I just learned this one and I love how Jay Sankey has constructed it.

It’s a great handling of the “spectator finds their own card” plot, and I love the ending where their card appears at their freely chosen number.

I think you’ll find it becomes one of your favorites because of its ease and simplicity for such a killer effect.

Where to learn it: Learn it from Jay Sankey himself on YouTube.

Effect: A spectator is asked to hold, and count themselves, 10 random playing cards. That spectator, or another, chooses a small number — and magically, upon recounting their cards, the first participant finds that same number of cards has been added to their packet.

The effect is then repeated under absolutely impossible conditions.

Difficulty: Medium. There’s one move here I’d consider difficult, but the routine is so brilliantly designed that you really have no business getting busted on it.

My thoughts: I don’t know about you, but I get kind of sick of “pick a card” tricks.

This one (and OOTW, above) are a great change of pace.

It really doesn’t matter what the cards are, they’re just objects in this effect. The first time more cards appear in the pile, it’s cool, but the second time, people will freak out.

David Blaine has used this trick in national TV appearances to great effect!

Where to learn it: Once again, go to Ammar. There are a lot of ways you can customize the performance (I really like how David Blaine does it, below), but your best bet is to go to Michael Ammar to learn the basics.

(Las Vegas Leaper is the second one Blaine performs here)

So there you have it!

Those are my best go-to impromptu card tricks. They can all be done with any deck of cards, borrowed, shuffled, you name it.

I think set-ups, duplicates, and gimmicks have their place — you can do IMPOSSIBLE stuff using those tools.

But it’s great to have stuff in your arsenal you can pull out at a moment’s notice.

What are your favorite impromptu, FASDIU card tricks? 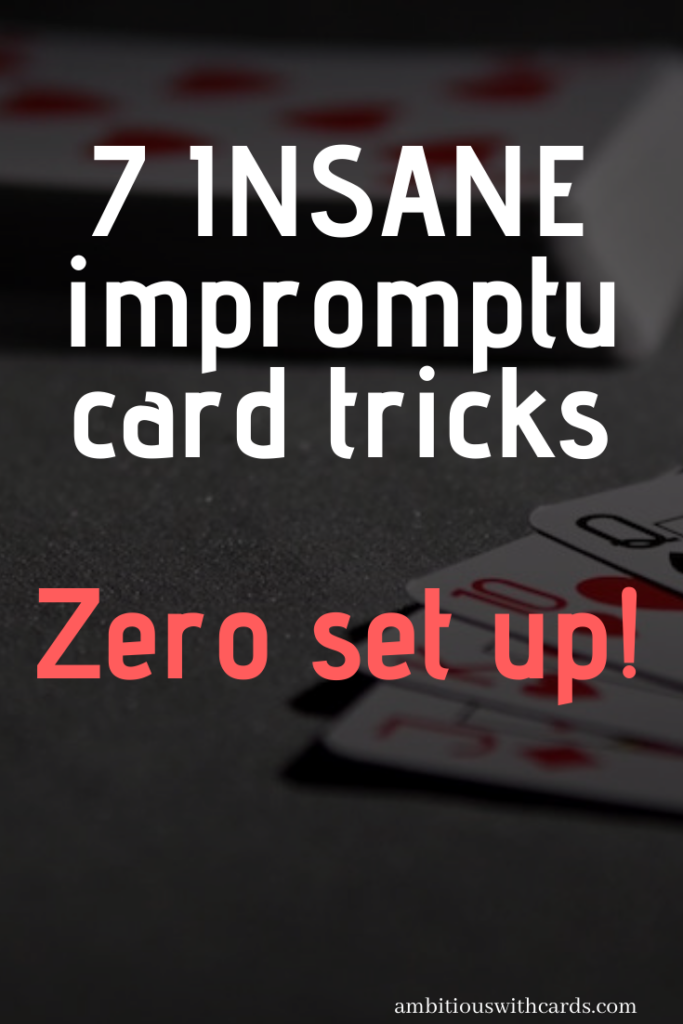