I may earn a commission for purchases made through links on this page, but I always stand by my opinion and recommendations.

The Invisible Deck is one of the most incredible, time-tested effects in all of card magic.

If it wasn’t already so, it was made famous by David Blaine in his early street magic specials.

These days, most intermediate to advanced magicians will keep an Invisible Deck in their arsenal to break out at the right moment.

The effect is stupidly simple, but absolutely impossible. And the trick deck nature of the routine makes it look completely clean and, again, impossible!

You can buy an Invisible Deck on Amazon here for a really fair price, but there are a couple of advantages to learning to make your own (which I’ll explain below).

To make your own Invisible Deck, you’ll need one complete deck of cards, a can of Krylon matte finish spray (or roughing fluid from a magic shop), and an open space to work and spray the cards. That’s it!

Let’s get into the full instructions and tutorial!

You can alter the presentation and performance of this effect to suit your own style, but here’s the “out of the box” performance and patter.

(This is where the Invisible Deck gets its name.)

The magician hands a participant an “invisible” deck of cards. The participant is invited to shuffle the imaginary deck as much as they’d like… Oop, careful, don’t drop them on the floor!

From there, the participant is free to choose any card from this invisible deck that he or she would like, turn it over, and place it back into the deck somewhere.

The imaginary deck of cards is then handed to the magician, who puts them away and now produces a REAL deck of playing cards.

Slowly, deliberately, he opens the pack and reveals one card turned face down among the rest of the face-up cards, and it matches the spectator’s freely selected card.

How does the Invisible Deck work?

The Invisible Deck uses an ingenious gimmick to make the above effect possible without any sleight of hand or pre-arrangement.

It uses the rough/smooth principle quite brilliantly.

Each face-up card is paired back to back with a face-down mate.

The backs of the cards have a rough finish, using a special spray, that causes them to cling lightly to each other.

You can easily spread through the deck to reveal ONLY face-up cards until you’re ready to reveal the spectator’s chosen card face-down.

The cards are paired in a deliberate system, with each set of mates adding up to 13 (with Aces being 1, Jacks being 11, and Queens being 12.) Kings are paired with Kings.

Clubs are paired with Diamonds, Hearts with Spades (because hearts and spades kind of look alike!)

Even cards are on one side, odd cards on the other. Easy, right?

So the 7 of Hearts, then, would be the face-down card behind the 6 of Spades (Hearts with Spades, adding up to 13).

This way, you can easily locate any card in the deck as you spread through.

As I mentioned above, you can buy an Invisible Deck for anywhere between $7-12 depending on where you shop.

(Check the current price on Amazon.)

Buying the materials to make one yourself won’t save you a ton of money (though it will save a little), but there are a few other advantages to a DIY Invisible Deck.

For reference, I spent about $16 total on a 12-pack of Bicycle cards and one can of Krylon matte finish spray, and so far I’ve made two Brainwave decks and an Invisible Deck, with plenty more spray left to use and 9 decks of cards remaining!

Not a bad deal.

(Check out my tutorial on how to make a Brainwave deck here.)

You don’t need much to do this project, just:

A complete deck of playing cards (I bought a 12-pack of Bikes from Amazon to make several gimmicked decks, you get a great deal this way.) It’s best if your deck still has the jokers, but not 100% necessary.

Roughing spray or similar alternative. You can buy this from magic shops at an enormous mark-up, but Krylon 1311 Matte Finish spray works perfectly and costs just a few bucks at Walmart or any craft store. Buy it from Amazon here.

A working surface. I used some trash bags laid out on my garage floor, but you could also use an old sheet, tarp, or whatever else you have around.

It should cost you around $6 or so to make an Invisible Deck by yourself, and you’ll have a lot of spray leftover to play with.

Now we’re ready to get to work!

Remove the ad cards and jokers (you’ll use the Jokers later) and lay out the 52 playing cards on your working surface.

It’s critical that the cards be laid out FACE DOWN.

If you spray the faces of the cards, your deck won’t work properly.

There’s no need to arrange them in a specific order; we’ll do that later.

For now, just lay them out with ample room to spray.

An inch or so between each card is perfect for avoiding overlap.

Time to get your roughing fluid or matte finish spray out.

All you want to do here is give each card a light but even coat on its back.

Shake the can first, then hold it about 10-12 inches from the cards.

Now spray! Keep your hand moving and avoid lingering on any one card too long. A light coating will do it, and you can always touch up any cards that didn’t get enough later.

(Overspraying will make the cards way too sticky, or worse, soggy and ink-bleedy.)

When you’re done, let the cards dry for about an hour before touching them.

It’s best to do this in a garage or on a covered porch. You can do it inside but the odor will be pretty strong for a few hours afterward and you’ll want to open some windows, at least.

Assembling the deck & order of cards

Once dried, gather the cards and deal them into two piles:

Now it’s time to match them.

Grab a card from the odd pile and find its mate in the even pile. Remember, the two will add up to 13, spades with hearts and clubs with diamonds.

Here is a full table of how the cards should pair in an Invisible Deck.

At this point, you should test to see if the rough finish is working properly.

When you’re done, you should be able to spread through the cards one way and see only ODD cards:

Flip the cards over, spread them out, and you should see only EVEN cards:

What order should the cards go in once they’re matched?

That’s up to you.

There’s no right or wrong way to arrange the cards as long as they can be located using the matching system.

Some popular cards include:

You may want to arrange these cards closer to the middle of the pack for the best visual effect.

With no direction whatsoever and the ability to name any card, Scientific American found that over half of all people will choose either the Ace of Spades or the Queen, King, or Ace of Hearts!

However, during your performance, you MAY discourage participants from choosing an “obvious” card like those and may want those cards closer to the edges of the deck for that reason.

In any case, there’s no WRONG way to arrange an Invisible Deck. Experiment and find what works for you.

A final optional touch: You may choose to cover one or both ends of the deck with a Joker. It provides cover from flashing the double-face-up nature of the deck, and can easily be brushed aside during your performance.

Putting the Invisible Deck in the box

When you perform, you’ll need to remember which way to take the deck out of the box so you don’t “flash” the wrong side.

I use a simple method, but you can come up with whatever you’ll remember.

I put the EVEN cards facing up toward the front of the box.

Why? Because there’s ONE big Spade on the front of the Bicycle box (an odd number), so if the spectator chooses an odd number I take the cards out from that side, evens facing up and odds facing down.

On the back of the box should be the Bicycle Rider Back design or at least an illustration of the back of the playing card, which has TWO rider figures (an even number).

If they pick an even number, I take the cards out with that side up.

You can choose any memory peg you’ll remember easily.

How to practice & perform the Invisible Deck

The Invisible Deck is quite simple to perform, which gives you a lot of room to craft an epic presentation.

I like to make a really big deal out of the card selection. I turn it into a whole process, first narrowing cards down to just red or black, then to one suit, then just high or low, and finally to a specific card.

It makes the routine more fun and can allow you to involve multiple people.

The longer build-up makes the payoff that much better.

But there’s nothing wrong with doing a quicker and more matter-of-fact performance of the Invisible Deck. In fact, that’s exactly how David Blaine did it.

As for practicing, you’ll want to get the hang of quickly and smoothly:

I use a Random Playing Card Generator to practice the whole process.

It pops up a totally random playing card and I practice taking the cards out and finding that card quickly and casually.

Remember: Use firm pressure when spreading through the deck, and then a light touch to loosen the rough card you want to reveal.

It’s not hard and you’ll get the hang of it quickly!

If people want to see the cards: If you perform the Invisible Deck well, chances are no one will want to examine the cards.

This doesn’t scream “TRICK DECK!!” like some other gimmicked packs do. It’s just a deck of cards with one turned over, which you can even hand them or have them pull out of the pack.

It’s a good idea to keep a matching un-gimmicked deck on you if you’re going to perform this, just in case you need to hand something out, but if people are asking to examine your ID, take a look at how your performance might be causing that.

Important note: Your DIY Invisible Deck might be stickier than a store-bought version. You’ll need to practice with it and work it in to loosen up the cards before you can perform.

The Invisible Deck is one of my favorite card tricks of all time, and it’s made even better when you can make your own any time you want.

If this all sounds like a lot of work, feel free to buy one from Amazon right here.

Looking for something un-gimmicked? Check out my favorite impromptu card tricks.

And let me know if you have any questions in the comments. 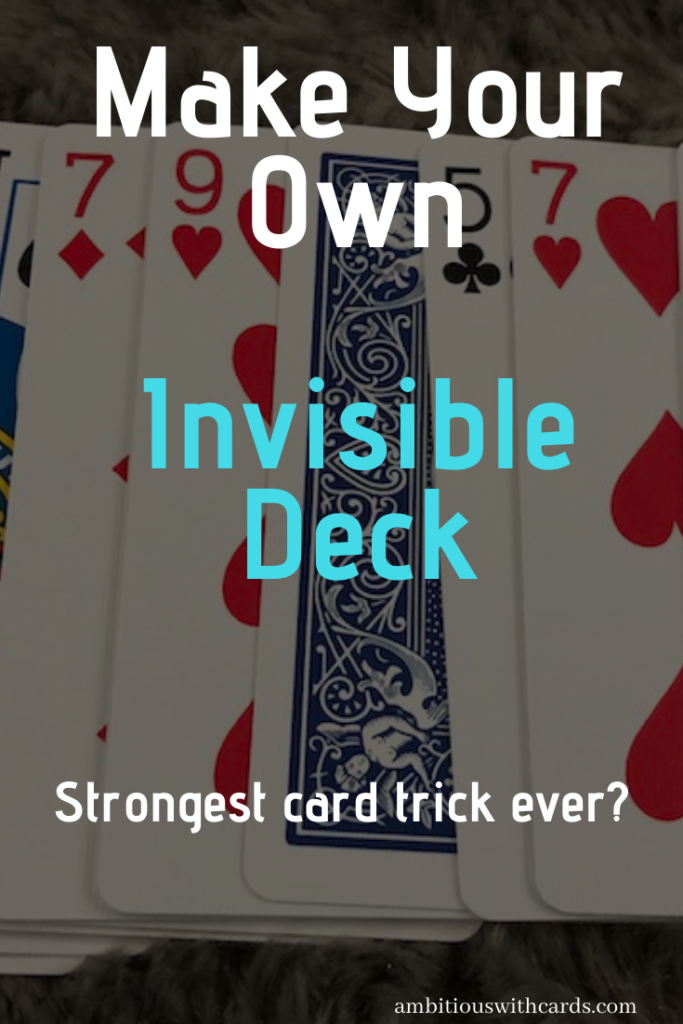 Aesthetics: 9 Art and Design: 8 Innovation and Creativity: 9 Paper Quality: 7 Durability: 7 Overall: 8 Every deck makes a difference. You can save a life....

Continue Reading
link to The 10 Coolest Playing Cards in 2022

The only investment you need to perform powerful magic that leaves your audience stunned and amazed? A deck of cards. Period.  Since this is genuinely the case, I have an ethical...