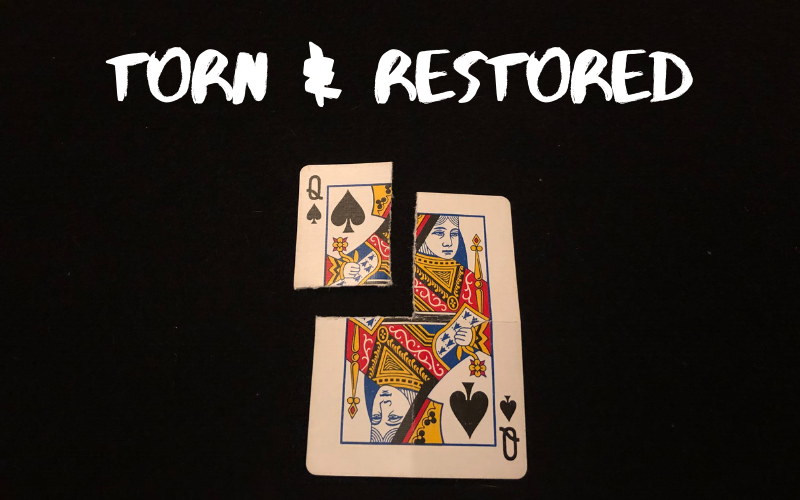 I love card tricks where something totally unexpected and visual happens.

Usually when you tell people to “pick a card,” they brace themselves for some version of the classic (and let’s face it, a bit cheesy) 21 Card Trick.

But in this effect, you take their selected card and RIP IT INTO PIECES right in front of them.

Then, magically, you restore it to its original condition.

It’s called the Torn and Restored card trick, and it’s a mind-blowing classic of card magic.

There are tons of variations and methods for accomplishing torn and restored, so in this article, we’ll go over the basics of the routine and where to learn the best versions of the effect.

There are more variations and different ways of presenting this effect than most card tricks, but I’ll describe the basic template.

It all starts with a participant selecting a card.

In some versions, they’ll be allowed to sign it freely on the face (to ensure no duplicates or trickery). In other versions of the effect, the card is torn into several pieces and the participant is allowed to keep one as a “receipt.”

The magician then places the rest of the ripped up card into his hand, the card box, or some other device. With a magical wave of his hand, the separate pieces disappear and all that’s left is a fully restored card.

What to look for in a T&R effect

If you want to add a torn and restored card trick to your routine, you have TONS of choices.

For contrast, there aren’t really different versions and methods for the Ambitious Card — it’s the same basic effect for everyone, and you’re free to customize it as you see fit.

Torn and restored is different.

Here are a couple of ways many of the popular versions differ:

In some versions, you’ll have the participant sign their card.

That way, they know for sure the restored card at the end is theirs and couldn’t possibly be a duplicate.

Other versions offer the spectator a small torn piece of their card as a “receipt.” The restored card at the end will be missing a corner or quarter, and the receipt will need to match exactly.

Visual vs Out of Sight Restoration

Most basic and classic versions of T&R have the “restoration” appear out sight.

Perhaps the torn pieces are placed inside a hand or card box and then revealed to have fused together.

More advanced versions of this effect offer a visual restoration, which can be quick and flashy (the pieces instantly transform to a full card in front of everyone’s eyes) or slow and mysterious (piece by piece restorations).

These are usually more difficult but well worth the effort.

Gimmick or Set-Up vs Impromptu

Many torn and restored effects require some planning ahead of time and can’t be performed FASDIU (from a shuffled deck in use).

You’ll often need a duplicate card or some kind of gimmick to complete the effect.

There’s often a relationship between the amount of preparation and the power of the effect (though not always). If you want a stunning, visual, miracle version of the effect — you may need to be willing to create and carry around a gimmick.

If you are willing to compromise a little bit in your routine for the ability to do this effect on the fly with, say, maybe just a duplicate card and nothing else, choose your version accordingly!

There are some completely impromptu torn and restored card tricks that require no duplicates or gimmicks, but those are rare. I’ll suggest one or two below, however, to get you started.

Now let’s take a look at some of the best torn and restored card tricks out there.

Let’s take a look at some of the best and most popular versions of this classic effect.

I’ll talk about what makes each one unique, how impromptu (or not) they are, and where to learn each.

Note: You can find (awful) tutorials on YouTube for most of these effects, but I always recommend supporting creators and learning from credentialed teachers.

I’ll note below where you can buy and learn the effects, where appropriate.

Torn is a hugely popular T&R that’s become a favorite in the magic community, both for hobbyists and workers.

It’s a visually stunning piece by piece transformation (meaning you rip a signed card into 4 quarters and add each one back individually) that fools even experienced magicians.

It uses a simple gimmick or prepared card, but the preparation can be done on the fly just a few moments before your performance with any deck without any special materials.

That makes Torn fairly, but not 100%, impromptu.

The restored card can be handed out at the end for examination and you’ll be left quite clean!

If it sounds too good to be true, well, it’s not. But Torn is a little angly and will take some serious practice to perfect and perform with confidence.

A classic, and considered by many to be the best torn and restored effect ever created.

Magician Guy Hollingworth really helped pioneer the idea of “piece by piece” restorations, and Reformation is his shining achievement.

What makes Reformation special and a little different from Torn is that the face of the card is visible at all times, making this look damn near impossible in real-time.

You’ll need a little preparation for this one, and it is QUITE angle-sensitive and difficult to master. The choreography, misdirection, and sleight of hand involved are expert level.

But the final effect is jaw-dropping.

Reparation by John Lovick is a revised handling of the basic Reformation effect.

It’s designed to be a bit easier than the former, though you make compromises in a couple of key ways.

Some of the beautiful convincers and more visual aspects of Hollingworth’s routine are sacrificed here for an easier handling.

But the final result is still incredibly powerful when done well.

Torched and Restored by Brent Braun

I love Torched and Restored. In fact, it was my go-to T&R for a long time.

It would fall under the category of a “quick, visual” restoration.

The pieces don’t fuse together slowly, piece by piece, but at the finale of the effect you get an amazing and instant climax — the 4 torn pieces BURST into a full card.

It’s really cool and you have to watch the performance (above) to appreciate it.

Torched and Restored does use a (very simple) gimmick. It’s easy to make and carry around, but you can’t do this 100% impromptu.

But the final card can be handed out and the effect is really easy to learn and perform.

It’s great for close-up magic in a bar or at a party.

If you’re looking for a 100% impromptu, no gimmicks, no duplicates torn and restored card, check out this cool effect from Jay Sankey.

He put this one out for free on YouTube. Watch the embed above for a performance and full tutorial.

This one is a little different, and it has to be since you’re not using any of the traditional T&R methods.

It’s a hybrid between a torn and restored and a transposition effect.

One card is torn while another is fully intact, and then they instantly switch places.

It’s not as powerful as something like Reformation, but it’s super easy to do and can be done any time anywhere.

Learn it from Sankey himself above.

You also can’t go wrong with a more “traditional” torn and restored, where the restoration takes place out of sight.

There are tons of different handlings of this effect, and while it’s less visually stunning, the basic version has a lot of advantages.

For one thing, these are typically easy to perform (so you can focus on presentation) and usually require only a duplicate (and sometimes not even that).

Above is a great handling from the 52Kards team.

Watch the video for a performance and a detailed tutorial.

When you start to grow weary of “pick a card, find a card” tricks, you’ll definitely want to add a torn and restored to your arsenal.

They’re visual, amazing, and most people have never seen anything like them before!

It may be worth learning a basic, off the cuff version while you invest in mastering a more powerful routine (like Torn or Reformation).

Both will come in handy in different circumstances.

What did I miss? What’s your favorite T&R effect?

(And don’t miss some of my other favorite effects like Out of This World and other impromptu card tricks.)