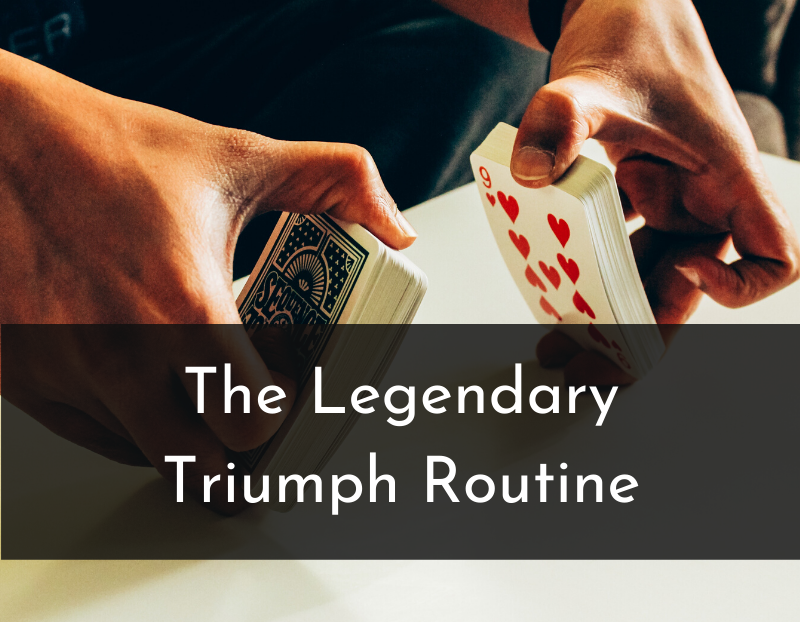 The ‘Triumph’ card trick is one of the most visually stunning demonstrations of card magic ever created, and if you’re not performing it yet, you’re missing out on a proven ‘reaction machine’ honed over decades.﻿﻿

What makes Triumph such a smash hit with magicians and audiences alike?

From its humble beginnings in the mid 20th century to the downright devious methods in use today, this card trick has charmed thousands of spectators around the world. It’s a tried and tested ‘worker’ that you can perform anywhere, anytime…with a borrowed deck to boot!

In the Triumph card trick, the cards are shuffled in a surprising way by the magician — half face up and half face down! With just a snap of the fingers, the magician makes all of the cards instantly face the correct way again… except the one selected card.

In this post, you’ll discover the surprising origins of this classic of magic, the most popular variations, and where YOU can master it.

History of the Triumph Card Trick﻿

﻿﻿Most magicians credit the creation of this outstanding effect to ‘The Professor’, Dai Vernon.

But that’s not the ‘full’ story…

﻿﻿﻿Although ﻿﻿it’s true that the most popular version of ‘Triumph’ was first published by Vernon, the premise behind this effect was first (to my knowledge) developed by the enigmatic Theodore DeLand in 1914.

﻿DeLand was a prolific creator of gimmicked cards and decks, and his version of Triumph (although it didn’t go by that name at the time) ﻿was called ‘Inverto.’

﻿However, despite DeLand’s early claim on this effect, we have Vernon ﻿to thank for creating the non-gimmicked and wildly popular version of Triumph that exploded into the mainstream of card magic and became the classic it is today.

﻿The beauty of Triumph lies in its apparent simplicity.

﻿Your audience selects a single card and commits it to memory. They return it to the pack and you thoroughly shuffle, losing it in the deck.

﻿Next, you do something that looks a little ‘crazy’.

You take half the cards in the deck and turn them face up, then shuffle them into the remaining face DOWN cards. You spread the cards to display that the deck is a mess of cards facing opposite directions, some face up, some face down.

﻿You place the cards down and make a magical gesture over them.

When you spread them this time, ALL the cards are face down…except one.

The one remaining face-up card is, of course, THEIR chosen card.

Sit back and take your well-deserved applause!﻿﻿

As you can tell, this trick is a lot of fun to perform.

So, let’s talk about how you can add it to your show!

﻿Triumph Variations and How YOU Can Master This Routine

﻿Since Triumph is SO popular with magicians, it’s also been reinvented and refined hundreds of times over the years. ﻿

I simply don’t have time to go into ALL the many variations in this post, so I narrowed them down to the most fooling, astonishing versions.

Pick No.1 – Vernon’s own handling

﻿This one isn’t strictly a variation since it’s the original routine, but for those of you who don’t know where to look for it, I thought I’d briefly cover how you can get access to this. (And for many of you, just learning this original handling will be enough. Sometimes you just can’t beat the classics!﻿﻿)

﻿Your best bet will be a book called ‘Stars of Magic’ which contains a variety of effects from some of the greatest magicians of the 20th century. One of the featured routines is, you guessed it, Vernon’s ‘Triumph’. ﻿

Grab your copy of ‘Stars of Magic’ here on Amazon.

Great. Now we can move onto some of the REAL variations…

The ﻿52Kards channel is usually a good ‘starting point’ for many of the classics of card magic such as the Ambitious Card Routine, and this Triumph tutorial is no exception.

﻿NOTE – although it’s labeled ‘Dai Vernon’, I don’t think the method is the same as the one contained in Stars of Magic – but it’s a great version nonetheless!

﻿﻿Once you have this method down, here’s where things get exciting…﻿

This one was a huge hit when it was released in 2019. It’s a very well thought out routine, with some MAJOR benefits over the regular Triumph methods.

﻿Here’s what makes Dark Triumph so awesome: it’s ‘sleight-of-hand-free’, doesn’t require a card force, and best of all, your AUDIENCE does the shuffling.

That’s pretty close to the ‘perfect’ Triumph, and for under $5, you really can’t go wrong!

Dani DaOrtiz never fails to come up with a clever way of tackling classic routines, and this one is no different.

The general verdict on this effect seems to be that while it’s GREAT for fooling other magicians, most of your spectators won’t really notice the difference between an effect like this and the regular Vernon method!

Get the Open Triumph DVD from Magic World here.

Any fan of Penn and Teller’s hit show ‘Fool Us’ will be familiar with this video. After all, it’s not every day a magician fools them so bad Penn tries to physically HIT him.

﻿That’s exactly what happens in this video.

﻿Keep an eye out for the moment Kostya executes a practically invisible ‘knuckle-busting’ sleight right beneath their noses. It’s something special to watch!

This is undoubtedly a Triumph routine reserved for advanced card magicians, but if you have the chops and are willing to put in the practice, you can’t go wrong.

Learn it from the master himself on Kosya’s website.

﻿Maybe this Triumph isn’t the cleanest or simplest. Maybe it’s lacking in a couple of areas that the traditional methods aren’t.

But I can’t help but give it major ‘kudos’ for how relevant it is and the quick thinking on the part of Adrian.

You see, this is a Triumph that you can perform ‘remotely’ via Zoom or any other video call.

﻿Which means that right now, it’s one of the best (if not the ONLY) ﻿Triumph style effects you can be performing!

﻿You call your friend and ask them to grab a deck of cards and to name any ‘four of a kind’. Once they’ve done that, you both mix face-up cards into face down. Now, with a magical gesture, you instantly and magically fix your deck.

﻿But it doesn’t end there.

﻿You ask your friend to spread through their cards. To their astonishment, THEIR deck has fixed itself…all the cards except the four of a kind they named.

You can get Virtual Triumph from Penguin Magic right here.

So there you have it! 6 different versions of the Triumph, all strong effects in their own right. Use whichever one of these resonates the most with you, but don’t be afraid to mix and match and come up with your own method!

(Editor’s note: Evan here – just chiming in to include my own personal favorite Triumph variation, “Back in Time” by Jay Sankey. It’s totally impromptu, quite easy to do, and includes a serious kicker ending. Check it out in my article on the best impromptu card tricks!)

﻿No matter which version of Triumph you decide to make your own, there are a few key tips that apply to ALL performances of this classic.

If your method of choice allows, a signed card is always more impactful than a non-signed card.

Even though it makes little sense in the context of THIS routine for you to be using a duplicate, subconsciously your audience will recognize that performing it with their signature across the face of the card makes for a stronger effect.

It can be tempting to rush the final reveal of Triumph.

After all, you’ve done all the hard work, you want to now you’re excited to reveal that all the cards have been magically fixed.

But be careful – if you go too fast, you won’t give your audience enough time to register what just happened.

Pausing between mixing the cards face up into face down and revealing they’ve fixed themselves gives the spectators time to ‘solidify’ that image of the mixed-up deck in their mind. It also increases the suspense and tension as they begin to speculate about what’s going to happen next.

And as a result, they’ll react stronger!﻿

﻿3. Know when to use this in your performance for maximum effect.

Let’s be clear. Done right, Triumph is a ‘closer.’

Rather, start with the weaker effect and end your show with Triumph.

Your audience will end on a high and you’ll be remembered as the ‘guy who visually restored the entire deck right beneath my nose’ rather than the ‘guy who was pretty good but spent an awfully long time counting piles of cards.’

To conclude, Triumph is a ‘must learn’ effect for any serious card magician. Using the information on this page, you’ll be able to astonish audiences anywhere, at any time, using this impromptu classic.

For more ‘classics’ of card magic, check out our posts on Out Of This World and the Torn and Restored Card

This article was contributed by Benji Wilkins.

Benji is both a magician and writer; which basically means whenever he’s not doing magic, he’s writing about it. You can check out more of his work at The Daily Magician!