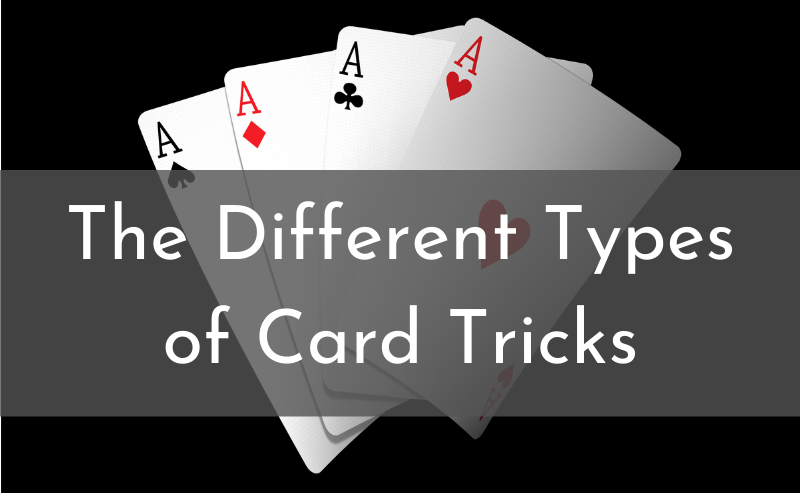 The world of card magic is continuously evolving, but there are lots of classics and pillars of card magic that will never go out of style.

There may be new and innovative effects created by genius card magicians, but they will always, more or less, fall under these 13 card trick categories that have been around for decades.

Let’s take a look at the different types of card tricks and some examples of each.

The main types of card tricks you can learn are:

Hopefully, you can take away a few new effects to add to your arsenal of card tricks.

We all know the classic “pick a card, any card,” while the magician fans out the deck.

The basis of many card tricks is finding a spectator’s card through various ways we will further explore in this article.

For the classic pick a card style trick, you have many different ways to find the card inside the deck based on your style.

You can force a card on the spectator and find a duplicate card in a different location like in your wallet. You can also have the card picked randomly and control it throughout the deck until the final reveal.

Whatever effect you choose, this type of card trick is the most popular option for card magicians. Finding a picked card placed back into the middle of the deck seems impossible for the casual viewer.

Some classic card tricks that find a card are:

Like a sandwich, this card trick style will have the spectator’s selected card sandwiched between two others during the final reveal.

The cards typically used to sandwich the spectator’s choice are face cards like the:

There are dozens of variations for this trick, from impromptu sandwich card tricks to elaborate tricks that require card forces and duplicate cards.

There is a sandwich card trick for every skill level. The more you progress with your card magic, you can dive deeper into the card tricks that require advanced sleight of hand techniques and setups.

Since all of the sandwich card tricks end up the same way, here are the most popular methods of sandwiching a card:

The most memorable card in a deck of cards is the Ace, and in four Ace card tricks, they will be the stars of the show.

There is a lot you can do with the four Aces. You can make them vanish from the deck, sandwich your spectator’s card, or use them by themselves in a packet card trick.

One of the more common routines is a simple yet impressive routine that involves cutting to the Aces one by one from a shuffled deck — there are plenty of methods around for accomplishing this.

Some other card tricks that utilize the four Aces are:

The term packet in card magic refers to only using a few cards for the trick’s performance.

You don’t need to use the whole deck of cards for these tricks, and in some cases, the trick only requires as low as three cards.

The main sleight of hand techniques commonly used in the packet card tricks is the double-lift and triple-lift. They also sometimes involve a false count like the Elmsley or Biddle.

Once you have mastered these two techniques, you can perform most packet card tricks with ease.

Some of the best packet card tricks that you can perform are:

A reversal card trick’s primary effect is that the card that a spectator chooses will be the only card showing its back in the entire deck.

There are various methods to perform this effect, with some being more advanced than others.

Whatever method you choose, a reversal card trick gets an incredible reaction when you flip over the reversed card to reveal the spectator’s choice.

It’s usually a variation on the pick a card plot with an incredibly visual reveal.

Some popular choices for performing a reversal card trick are:

Color change card tricks take some practice to master, but are well worth the effort.

These visual card tricks use quick sleights of hand to switch a card into its opposite color.

If you are too slow during the techniques, the spectator will notice the color change’s secret.

But, with enough practice, you’ll find that a color change is an impressive trick that will catch audiences by surprise.

Some of the most impressive color change cards tricks are:

Card magic is all about doing the impossible.

One of the greatest versions of doing the impossible is predicting the future or reading a spectator’s mind — this is one of my all-time favorite types of card tricks.

Before the trick even begins, the magician already knows what card the audience member will choose. There are tons of variations to these tricks, and when done well, these will get the best reactions you’ve ever seen!

Most people will react to a prediction trick with utter disbelief and leave wondering how you knew the answer.

To amaze people at during your next performance, check out these three mentalism/prediction tricks:

Every good showman knows how to tell a captivating story.

A storytelling card trick uses each type of card in the deck as a character or plot point.

Storytelling card tricks are one of the most highly customizable types of card tricks, and you can create your own story that better fits your personality and performance style.

They’re not always the most stunning or amazing card tricks, but they’re HIGHLY entertaining. Every magician needs at least one of these in their set.

Some classic storytelling card tricks are:

Faster than the blink of an eye, a magician can make any playing card vanish into thin air.

The methods of making a card vanish can vary greatly. You have visual vanishing card tricks that use sleight of hand techniques that are performed quickly enough to be unnoticeable by the spectator’s eyes.

You also have vanishing card tricks that use a slower approach.

These card tricks have a long build-up to the trick and reveal to the audience member that their card is no longer inside the deck of cards when closely examined.

If you want to include a vanishing card trick into your skillset, try out these three classic tricks:

So you are at a family get-together, and someone happens to have a standard deck of playing cards.

Expecting you to be stumped and unprepared, they say, “show us a trick!”

Watching your every move, your family fully expects you to come up with an excuse to run to the next room where nobody can see you. However, you stay calm and collected and begin your performance.

Much to their surprise, you perform an incredible card trick that is seamless and unexplainable that required zero preparation at all beforehand.

That is the beauty of an impromptu card trick.

Nothing is more impressive than a magician who can perform a fantastic card trick without gimmicks or any prior setup.

Before performing an impromptu card trick, have the spectators or audience members examine the deck of cards to confirm there is no setup involved to elevate their reactions even more.

Three of the most popular impromptu card tricks are:

These self-working card tricks are typically more appealing for the beginner card magician because of the easy difficulty level.

These tricks require zero sleights of hand and work solely off memorized mathematic patterns and formulas.

These tricks typically aren’t the most glamorous option and usually require you to break the deck into separate piles throughout the trick continuously. To find the spectator’s card, you will use an elaborate elimination process until the card is finally revealed.

While the name implies that these card tricks are self-working, you will need to memorize the patterns and card-amounts in the trick to make sure it works properly.

If you place down one-too-many cards, you could mess up the performance and need to start over from the beginning.

Some self-working card tricks that you can try out are:

A trick deck allows you to warp reality and perform a trick that surpasses your typical card trick with a standard deck of cards.

On the outside, the deck of cards looks normal. But, hidden beneath the surface layer are vital information that helps the magician perform impossible tricks.

The possibilities are endless with a trick deck, and new innovative trick decks are released regularly with more astonishing illusions.

There are a few must-have trick decks that every magician should own. These decks are classics, and the reactions from spectators are always excellent.

Four of the best trick decks you should own are:

Similar to the trick deck, a gimmicked deck has different traits than your standard deck of cards.

But, in the case of a gaff deck—the differences are massive.

You will see card tricks using a gimmicked deck of cards that you never thought were possible.

The gaff cards do not shy away from being different from a standard set of cards, from blank cards to card faces that transform.

The typical gimmick trick will use only one or two unique cards that you can include inside an ordinary deck of cards.

These gimmick cards include an instruction manual that gives you everything you need to know to perform the trick and stun audiences.

Some of my favorite gimmick tricks are:

As you continue to journey further into card magic, think to yourself which type of card tricks you haven’t had a chance to explore yet.

A great card magician is always trying new things and testing to see what gets the best reactions from the crowd.

And of course, these are the main categories on which most of the classics are based — but there are always effects here and there that don’t fit neatly into any specific type.

What’s your favorite type of card trick to do? And what did we miss?

For more, check out all of my card trick guides.