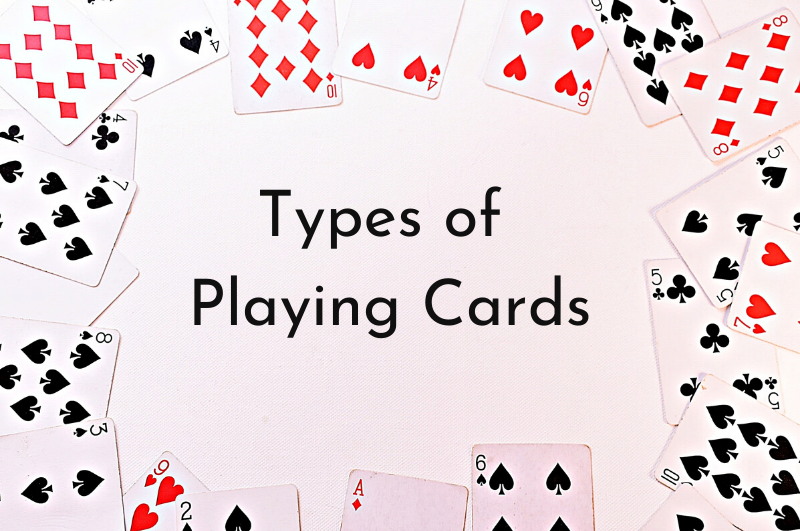 If you’re new to cards, opening a fresh deck can be a little intimidating.

52 total cards (plus the Jokers and ad cards) to sort through. Four different suits. Face cards and numbers galore.

It’s all a little chaotic when the deck is shuffled, but there are actually a few different ways to categorize the types of cards in a deck.

Cards are typically divided into four suits (clubs, hearts, spades, diamonds), two colors (red and black), and face cards and number cards. The four Aces are a category of their own, and each deck comes with 1-2 Jokers and a handful of advertisement cards, as well.

Let’s take a closer look at the different kinds of playing cards and how you can sort and categorize them.

The simplest way to break down the types of cards in a deck is by suit.

There are four suits in a standard deck of cards:

(By the way, I listed them in that order for a reason. CHSD, or Chased, is a common memory device used by magicians in different kinds of set ups or deck stacks.)

For example, there are four Kings, four Jacks, four Queens, etc. in every standard deck of cards… One of each suit.

Accounting for all 52 cards and four suits, there are 13 cards of each suit (A through K) in a deck.

When you break open a fresh pack in new deck order, the cards will be arranged by suit.

Another common way to categorize playing cards (especially in certain magic tricks like Out of This World) is in terms of red or black.

There are 26 red cards and 26 black cards in a deck — Hearts and Diamonds are red, Clubs and Spades are black.

(Jokers are usually neither red nor black, but we’ll get to them shortly!)

Some specialty decks use colors other than red or black. For example, the red cards are pink in Bicycle pink Breast Cancer Awareness decks, and the blacks are blue in blue decks of Bicycle Dragon Backs.

But in your standard deck of Bicycle Cards, red and black is what you’ll see.

Face (or Court) vs Number Cards

Here’s another way to break down the different types of cards.

Calling them face cards or number cards is useful shorthand when breaking down a card game or magic trick.

There are three face cards of each suit in a deck, for a total of 12 court or face cards per deck.

There are four Aces in a standard deck of cards, and they’re in a category of their own.

Aces aren’t usually lumped in with face or court cards since they, well, have no “face” on them!

In card magic, the Aces have a special mystique to them — that’s why there are so many great four Ace tricks (productions, sandwiches, etc.)

Fun fact: The Ace of Spades, of which there is only one in a standard deck, often has a special design that distinguishes it from the other three.

Jokers can be tossed aside, but it’s a good idea to keep them around.

If you play certain variations of Poker, Euchre, Go Fish, Crazy Eights, and other games, you might end up using your Jokers during these card games.

Jokers are also really useful for a lot of card tricks including sandwich tricks (where a selected card magically appears between two Jokers).

A standard deck of Bicycle, Bee, or whatever cards you can grab from the store, will usually have a few advertisement cards inside every fresh pack.

They might advertise a free app with card game rules, a book, or something else.

Custom decks of cards marketed toward magicians will sometimes also include special cards like double backers, which are an amazing tool for card magic!

So that about covers the different types of cards in a standard deck.

Thinking about these different categories is really helpful when you’re trying to brainstorm new card magic effects or concepts.

A lot of great classic card tricks are based on these card categories!